“Old age is like everything else,” said Fred Astaire. “To make a success of it, you’ve got to start young.” The same principle applies to home design: Plan for all stages of life when remodeling or building, even if you are in perfect health now. You never know what life may throw your way, be it be a minor mishap (breaking your leg) or something more serious (being confined to a wheelchair).”.

Climbing stairs is more difficult as we age. A ramp is useful, but it’s usually not available in existing homes. When house shopping, avoid sunken living rooms, split-level and multi-story homes, and raised entrances. Also, make sure you have a direct line of sight from the front door to the street: keep plantings low, remove trees, and get rid of other obstructions. First, it will be easier to see visitors (wanted or unwanted) and the goings-on on the street without leaving the house. Secondly, if you are in distress — if you trip on the way to your front door, for example — others can more easily see you and dispatch help. 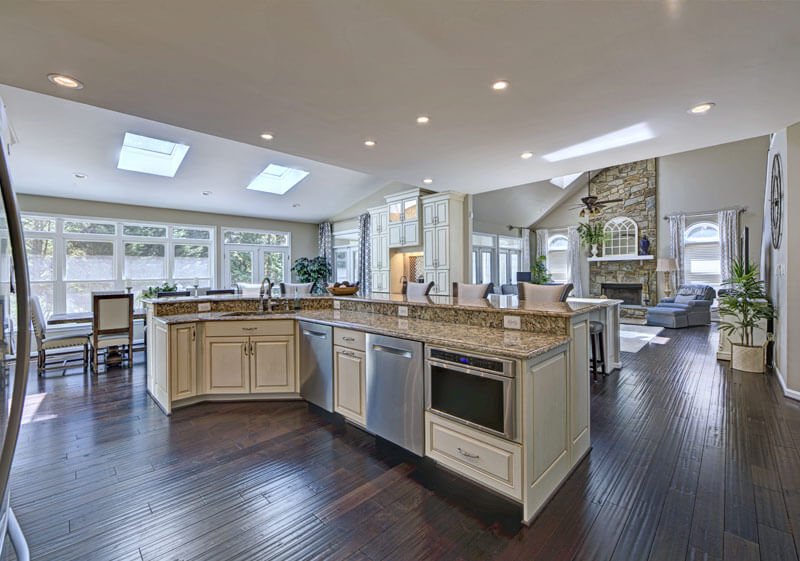 Home automation has come a long way from the days of simple garage-door openers and lighting timers. Today, whole-house control systems, like the AuroRa System from Lutron, let you turn on groups of lights throughout the house from one master control or wireless remote. A system such as this, for example, allows you to enter and exit your home safely at night: You can turn lights off after you leave via remote and illuminate the entry and front hallway when returning. Some lighting controls can be hooked up to home security systems and will turn on all the house lights if an alarm is sounded.

3. Bring the Outdoors In

If getting outside isn’t always possible, allow those on the inside to enjoy nature anyway. Try French doors that allow a view of the backyard from a sitting area.

In addition to illuminating a space, daylight has strong psychological benefits for everyone, especially people that are unable to travel outside the home easily. Bringing daylight in can be as simple as adding a window or traditional skylight, or as complex as a Solatube daylighting system, which captures sunlight on the rooftop and redirects it down a reflective tube into interior spaces.

Multiple water sources add flexibility to bathing arrangements. With a rain shower placed in the center, a more traditional shower head at one end, and a handheld shower near a fold-down teak seat with a separate valve to control it from a seated position, people of varying mobility can bathe in the same shower.

Any obstruction, even if it’s just an inch high, can be difficult for some people, so a roll-in shower with no curb is best. To avoid water getting on the floor, you have three options: Build a shower area large enough so you can create a gradual recess to the drain, raise the floor of the rest of the bathroom, or install a drop-in shower with a flange that can be lifted up to serve as a curb when someone is in the shower. To make getting in and out easier, you’ll also want to leave plenty of room around the shower, meaning spacing cabinets and toilets at an adequate distance.

Searching for a towel and robe when coming out of the shower is a mildly annoying task for an able-bodied person, but for those with severe physical limitations, it’s a much more difficult undertaking. Consider a towel/robe hook right next to the shower, ensuring they’ll be handy and easy to grab at all times. On a related note, include recessed storage in the shower for shampoos and soap. Keep clutter, cords, and anything else that may cause a trip at bay with drawer organizers that make sure everything has a place.

It’s simple: If you can work a faucet with a closed fist, it’s suitable for a range of people, including those with severe arthritis. (The same applies to door knobs and cabinet and drawer knobs and pulls.) An offset single-lever faucet is ideal because it can be operated with just one hand and doesn’t require the user to reach so far behind the sink. You can also opt for motion-sensor faucets that activate when you wave your hand under them, such as Kohler’s Tripoint Touchless Electronic Faucet.

9. Flooring Should Be Slip-Resistant and Comfortable

There are a few products on the market now that can be applied to tile or stone flooring that don’t wear off or damage the appearance of the surface but add tread to prevent slipping. When tiling, use smaller tiles that have less surface for slipping. Nonslippery cork flooring (shown) adds a little cushion and warmth underfoot. Modular carpet tiles, which can be taped down to prevent trips, are a good alternative to bath mats and small area rugs that have a tendency to move underfoot.

10. Create Work Areas in the Kitchen

Placing the stove, sink, and fridge in close proximity to one another (but with counter landing space in between) eliminates the need for extra steps with heavy trays and dishes.
Most everyday items should be placed between knee and shoulder level. For storage below knee level, use a drawer or pull-out shelf, such as SuperCabinet from Diamond Cabinets. This eliminates the need to bend down or reach for items in the back of the cabinet.

12. Bring Cabinets Down to Countertops

But if you have the space, consider putting a few cabinets directly on top of the counter. Because counterspace is at such a premium in most kitchens, this might have to be done in limited areas and should never be done throughout the room. However, it does allow those in wheelchairs to reach the most commonly used items.

In order for a wheelchair to be able to get through, you should leave at least 42 to 48 inches in kitchen aisles. The same rule applies in hallways.